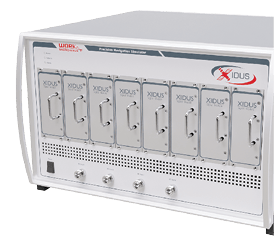 In a world of constant change, the ability to respond must be flexible and adaptable to varying situations. This holds true in positioning, navigation and timing even more so than elsewhere. We know, for example, that threats in the military field are constantly evolving; that the best ways to meet the PNT needs of autonomous driving have yet to come into sharp focus; and that Galileo signals are rapidly evolving while other GNSS also continue to innovate and modernize.

How can an off-the-shelf simulator meet a wide range of unknown and unanticipated factors? How can a product built for industry-wide standards reproduce the highly specific conditions encountered in the discrete environment of a particular application of interest to product developers?

Instead of a one-size-fits-all simulator, manufacturers can now look to WORK Microwave for self-configurable testing. The way the company’s Xidus GNSS simulator works, adding a new waveform distortion is easily achievable. It’s not trivial, but those who want to do signal exploration tests, to tailor their testing environment to a specific potential platform or threat, can perform this function on their own.

The concept becomes easiest to explain by taking the defense sector as an example. Here, threat aspects detail the profile of specific threat actors and the types of attacks they might make. Defense contractors have those specs but may be reluctant to share them with a simulator OEM. Yet the specs must be input into the simulator, because there is no other way for a defense contractor to validate that a receiver is robust to particular types of threats without simulation.

You can’t take a receiver onto the battlefield without knowing in advance, and knowing very well, how it will perform under specific jamming or spoofing conditions. So a simulator OEM has to replicate the threats specified by the defense contractor into a bespoke simulator. It is a very expensive undertaking and the military contractor would prefer that the knowledge not leave its premises!

This model is extendable to the way similar scenarios hold true in other PNT sectors and domains. A Xidus simulator provides the means to get one’s hands inside the simulator and change it. It facilitates producing new waveform distortions, whether evil or reflected or distorted in any other particular way. The WORK Microwave simulator does that through the graphic user interface (GUI), where the tester enters the specification of the desired processing in a language that’s very similar to that used in graphics processing cards.

This gets around the problem of having a proliferation of important information. Designers and manufacturers with a unique selling proposition (USP) that they want to test would prefer not to communicate this to the simulator OEM.

In essence, WORK Microwave delivers with Xidus a standard multi-frequency multi-constellation GNSS simulator with pre-defined black boxes within it. This enables the user to define their own functionality . Now users can do it themselves, writing in a description language similar to Compute Unified Device Architecture (CUDA) or OpenGL Shading Language (GLSL). As many in the PNT community have experience in that style of processing, when presented with a WORK Microwave GUI, they will know how to code what they want to do and run that as part of their simulations.

A further aspect of the need for customizable simulation presents itself in the domain of autonomous vehicles. “The way we perceive the role of GNSS in autonomous driving,” says Andrew Richardson, business development manager at WORK Microwave, “is as one part of a tiered navigation system.

“For example, localized pseudolites might provide the signal received by the car, and they in turn will need disciplining to provide the positional accuracy needed. Or the signals from space may be used directly by the car. But it seems very likely that the system will depend on GNSS signals somehow. If pseudolites are the preferred solution, you’re probably going to want to generate bespoke signals. For example, the degree of acceleration-induced Doppler seen by a car will be particular to this application and the signals will be designed around this. You’re probably going to need to put down cells similar to a cellular network and you need to develop a signal structure and mechanism for doing cell handover, multipath mitigation and rapid acquisition.”

“The evolution of waveforms for autonomous driving is a long way from being over,” he concludes, spotlighting the need for a highly configurable simulator, one that is highly adaptable by the user, that is, the designer/manufacturer.