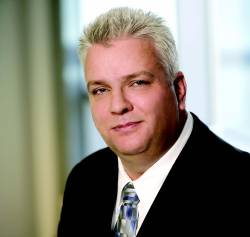 Michael Ritter is president of Hexagon Positioning Intelligence and also serves as president and CEO of NovAtel Inc. “One of the businesses we are in is making high-end, very-high-signal-quality, very-low-group-delay GNSS receivers,” Ritter told us.

“With our current line of NovAtel GNSS receivers, the OEM7 series, we incorporate all four GNSS constellations— GPS, GLONASS, BeiDou and Galileo—in parallel, as well as WAAS and EGNOS and the other augmentation systems. All the boards we have produced, starting with the OEM6, with very few exceptions, have been Galileo-capable.”

Going Way Back
When NovAtel launched its groundbreaking OEM6 series back in 2009, the company had already acquired quite a bit of experience with Galileo. “Actually, it started really early, in the year 2000,” Ritter said. “We had had some discussions with ESA about the Galileo signal structure, and that was when we decided to create what was essentially the first prototype Galileo receiver.

“Things were very fluid back then”, he remembered, “Not everything was clearly defined, so it took a while to get those first receivers out, but by 2004 we had a Galileo receiver available, before there were any satellites in orbit.”

“At the beginning,” Ritter said, “it was kind of engineering driven; because we could do it, we did it. And then we thought, for most of our market it would eventually become a requirement to use all available constellations. So it was less driven by making money and more driven by us saying let’s get ahead of the game.”

“We have been ‘in Galileo’ from the beginning and we are part of the Galileo infrastructure,” Ritter said. The infrastructure referred to includes the Ground Reference Chain (GRC) receiver, used to monitor the quality of the Galileo signal. The contract to build it, awarded to NovAtel in 2005, further solidified the company’s relationship with Galileo.

Strong Suit
Various arguments have been put forward in favor of multi-constellation GNSS and the consensus has generally been ‘the more the merrier’, but if you have to choose just two, Ritter said, there are two systems in particular that really do make a nice pair. “Galileo is a great back-up to GPS, and GPS is a great back-up to Galileo; the two fully compatible Western-World systems are kind of a match made in heaven,” he said.

Ritter cited, among other things, the spoofing threat: it’s a lot harder to spoof two constellations than to spoof just one. This makes the GPS-Galileo pairing potentially extremely interesting, particularly from a military/security perspective.

“But even in the civilian world,” Ritter followed, “having a Galileo constellation, hopefully soon with an authentication signal, and at the same time having the GPS constellation, it will be much harder for anyone to attack the signal.”

In terms of Galileo’s stand-alone added value, Ritter said, it’s nice to see more and more satellites coming online, delivering greater and greater accuracy, but the real focus should be on authentication. “When I talk to people about Galileo, that’s the real seller.”

The European GNSS Agency, which runs the Galileo Program at the behest of the European Commission, seems to agree, regularly highlighting the planned unique authentication capabilities of the Galileo Open Service and Commercial Service, as well as the higher-security-level, encrypted Public Regulated Service (PRS).

In addition to providing much-anticipated authentication and security features, certain specific characteristics of the Galileo signal provide additional multi-path resistance, so important in difficult environments such as so-called urban canyons.

“Galileo’s more modern signal structure,” Ritter said, “for example the alt- BOC [alternative BOC], make it a way more reliable and multi-path-resistant signal. It’s something that people in the 1970s, when GPS was defined, didn’t foresee.

The private sector remains willing and able to aid in the development of new cutting edge GNSS technologies, Ritter added. “Over the last few years, Hexagon AB, which is a European company, has invested more than 300 million EUR in correction services that can help the Galileo project meet many of its remaining goals.”

Once in a Lifetime
Recently, Ritter got a chance to look at one of his company’s GRC receivers in Kourou, French Guyana, when he was invited there to witness the lift-off of four new Galileo satellites onboard the astounding Ariane 5 launcher.

“Seeing one of the monitoring stations with our equipment was extremely satisfying,” Ritter said. “It’s a huge receiver that we custom make. And it has our logo on it, so everybody knows who built it.”

As for the launch, Ritter said, “Well, it was really a once-in-a-lifetime experience, and I am really appreciative of the GSA having invited me. Looking back at all the work we have done together, being involved in Galileo since the beginning, to actually witness a launch, and knowing the system is now working, showing a solid performance, it was really a nice finish to the race, kind of like putting the lid on the pot.”