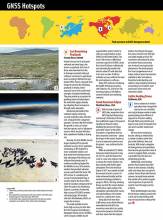 1. Last Remaining Peatlands
County Kerry, Ireland
√ Ireland is known for its lush green wetlands and raised bogs, also known as peatlands. But most of these areas have been lost due to drainage associated with peat cutting or conversion to agricultural land, according to Wetland Surveys Ireland (WSI). There’s a big push from Europe to conserve the remaining peatlands


in Ireland, which represent some of the world’s best examples of peatland biodiversity. They also provide an ecosystem for purifying water and help balance the watershed supply naturally by mitigating flood consequence through water absorption.

Monitoring the health of the wetlands requires extremely accurate vegetation data collection over a long period for comparison purposes. Surveyors like WSI monitor the growth or recess of certain indicator species, such as Sphagnum mosses, which are good indicators that a peatland is healthy or drying out.

Recently, the Irish Wildlife Service began requiring WSI to provide submeter accuracy for its vegetation monitoring, so WSI looked for a more sustainable solution, one that would let the field personnel take advantage of the devices and software they already used. To continue monitoring bogland for the Wildlife Service, WSI needed a solution that provided submeter accuracy and tested the Arrow 100 GPS receiver in a weeklong trial survey of remote blanket bogs in western Ireland. The Arrow 100 is made by Canadian company and Esri Silver Tier partner Eos Positioning Systems, a provider of extremely high-accuracy GPS/GNSS receivers and related apps. WSI worked with Eos’s UK distributor, MGISS, to acquire the receivers.

The small, portable receiver draws high-accuracy location data from the European Geostationary Navigation Overlay Service (EGNOS), a free European satellite-based augmentation system (similar to wide area augmentation system [WAAS] in the United States). The Arrow 100 receives a differential correction signal from EGNOS, sends this to the iOS device via Bluetooth, and automatically overrides the device’s native GPS with data that is far more accurate. It delivers submeter accuracy without the need for new hardware or software.

Today, WSI continues monitoring the health of the bog ecosystem with Collector, iOS, and Arrow 100, ensuring progress in the fight to conserve Ireland’s last remaining wetlands.

2. Great American Eclipse
Westford, Mass., USA
√ With the help of plenty of GNSS data, researchers from MIT’s Haystack Observatory and Norway’s University of Tromsø have published a paper in the journal Geophysical Research Letters detailing the presence of eclipse-generated “waves” in the Earth’s ionosphere. A hypothesis that has been around for some time – about the impact of the moon’s shadow as it races at supersonic speeds across the planet – was confirmed by the findings.

While an estimated 212 million Americans looked skyward on Aug. 20, 2017 to catch the historic first coast-to-coast solar eclipse in nearly a century, the moon’s shadow was busy messing with Earth’s upper atmosphere. The Great American Eclipse of 2017 was notable for both the amount of land it crossed (14 states witnessed totality) and the sensitive technology available to gauge its effects. The long-standing theory was that the moon’s shadow would induce rapid cooling in the atmosphere, generating bow waves, and rapid heating as the shadow moved on, creating stern waves.

Using data from more than 2,000 sensors across North America networked into the GNSS, the researchers were able to accurately measure the presence of both bow and stern waves from the eclipse’s shadow. According to the paper, the waves moved at over 650 mph and lasted roughly an hour. The researchers were pleased to prove yet another theory concerning one of nature’s most spectacular phenomena. The results present the “most comprehensive set of eclipse-induced wave characteristics available to date” and advance theoretical understanding, and address a long-standing controversy surrounding one of nature’s most spectacular active events, the researchers stated.

3. Cattle-Herding Drone
California, USA
√ Even as advances in modern agriculture have changed the way tractors are controlled and crop techniques evolve to make growing things more efficient, it appeared as if farmers walking through fields using whistles and dogs to move herds of livestock from one area to another would never change.

But now drone herding has become a thing as evidenced by a number of videos online from places like California, Texas and Australia. With today’s navigation technology drones and agriculture have become great partners when it comes to mapping fields, assessing crop health from the skies and distributing pesticides.

Additionally, some farming pioneers have started using their drones to herd animals, including cattle and sheep, from one place to another. Drones fitted with thermal cameras can easily locate animals that wander off or perform regular aerial inspections to prevent the need for more thorough searches in future.

These breakthroughs may mean the old farmer walking around with a stick and his dog herding cattle may one day become a thing of the past.